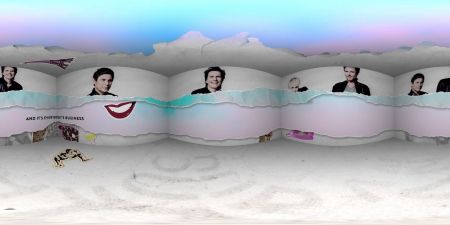 en Duran Duran were in their heyday, back in the video-ruled MTV 80s, they always seemed like little children in a big man's world. Simon Le Bon's chirping voice just didn't carry the authority to make his lyrical statements hit home. Now with Paper Gods, it seems as though little has changed.

On “Last Night In The City,” which features Kiesza, Le Bon announces, “We've got to live this night/ Live it like our last night/Because nobody cares if there's no tomorrow.” He sounds truly apocalyptic. But is he talking about global politics, or just getting science fiction-y? Hard to tell.

While Duran Duran was smitten with dance acts like Chic from the very beginning, the group is oftentimes at its best with slower numbers. One of this album's best tracks is “You Kill Me With Silence,” where Le Bon states, “You kill me with silence/That's your style, girl.” “What Are The Chances?” is another fine ballad, which features some of Le Bon's best singing on the album.

Then again, it's sometimes the silly stuff that captures your attention. Could a girl that doesn't like to dance really be suffering from danceophobia, as described in “Danceophobia”? This could have been a fun little song, but Duran Duran perform it like it's a life and death situation. Alert Sigmund Freud! This girl suffers from the fear of dancing! Best of all, the track feature Lindsay Lohan as a doctor, called upon to treat the girl deathly afraid of getting down.

Duran Duran is out of its element, however, whenever it tries to bite off more than it can chew. The album opens with “Paper Gods,” a kind of take on false gods. The same goes for “The Universe Alone,” which comes off like one of those fantasy movie closing songs. Duran Duran is really good at singing songs about super models, yacht trips and disco nights. The group is just not intellectually qualified to sing “I'll see you in some other lifetime,” as Le Bon predicts during “The Universe Alone.”

A band like Duran Duran is quite alright if you don't listen too closely or take them all that seriously. If you just tap your toes to the grooves and watch their videos as though they were in Saturday morning cartoons, you'll be okay. However, if you expect these guys to be your musical Huffington Post, you're in trouble. Just as they sing about paper gods, these folks are like paper superheroes. Don't ever stake your life on them.
http://www.axs.com/duran-duran-sings-of ... gods-66702
Часовой пояс: UTC+04:00
Страница 1 из 1
Powered by phpBB® Forum Software © phpBB Limited
https://www.phpbb.com/